Get fresh music recommendations delivered to your inbox every Friday.
We've updated our Terms of Use. You can review the changes here.

by In Shadows and Dust 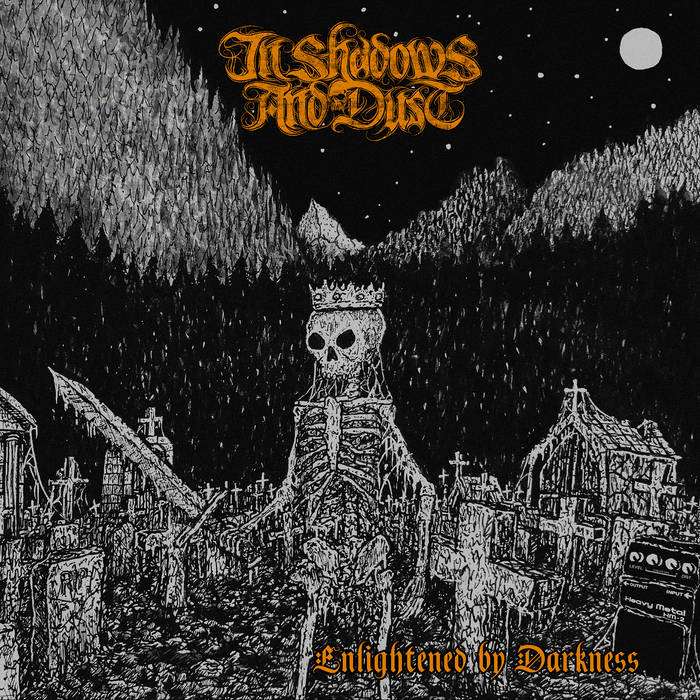 Metallurgical Fire This is my favorite HM-2 based band, and that includes the Swedish pioneers of the sound. I love all four albums but the last two are classics. Crusty blackened death metal with perfect guitar tone and great drums. This was my number one played album on other platforms in 2019. Favorite track: Deathlike Silence.

"Steeped in HM2 death metal worship, Enlightened by Darkness is In Shadows and Dust’s fourth album in as many years. Melding HM2-driven death with cold black metal, it’s not uncommon for Thirion to sharply transition from soaring blackness to bass heavy, grooving death metal at the drop of a hat. There’s also a healthy dose of D-beat injected into the songs, meaning that In Shadows and Dust isn’t a project that retreads ground that’s been explored countless times. "
- Decibel Magazine
goo.gl/w4S6To

"...the massive HM-2 tone (the saw is the law!) provides a monstrous undercurrent to a track that’s propelled by furious battering and thundering drumwork and suffused with waves of vicious, roiling riffs. No less vicious are the vocals, which are unhinged and mind-scarring in the quality of their shrieking proclamations. The turbocharged energy of the song is irresistible, but surges even higher into the red zone through the appearance of high, scintillating leads, rippling in an intense and effervescent boil."
- NO CLEAN SINGING
goo.gl/wfKsMw

"In Shadows and Dust stick the middle finger up to those expectations by bringing crushing heaviness, exciting rhythm and melodic passages that has all the workings of Swede-Melo Death but so much more....Death metal rarely sounds this good."
- Games, Brrraaaiiins, and a Head-Banging Life
goo.gl/3BPgd8

" In Shadows And Dust plays a musical style that goes back to the 90's era of melodic Swedish black and death metal while also adding in a more aggressive approach to the genre, the production sounds very professional while the lyrics cover darkness themes. In my opinion In Shadows And Dust are a very great sounding melodic and old school mixture of black and death metal. RECOMMENDED TRACKS INCLUDE "Enlightened By Darkness" "Deathlike Silence" and "At the Edge Of The World". 8 out of 10
- A Different Shade of Black Zine
goo.gl/7nVdn5

"..once again in shadows and dust manages to push its limits to offer a powerful and elegant album, " enlightened by darkness " Bears its name. Time passes, this passionate man refines his art, gives him more and more importance and we really hope that December 21, 2019 will be synonymous with a new chapter of his life."
- United Rock Nations
goo.gl/o1bgaQ

" In Shadows and Dust : Enlightened By Darkness - Album
IN SHADOWS AND DUST blend Swedish death metal like early NECROPHOBIC, In Flames and At The Gates with the melodies from Naglfar and Dissection (Official). It's a combination that works good. But it's not until the third track, "Revenge", that it start to sound really good. This is absolutely something that you should check out. It's old school and have a classic sound, but it doesn't sound exactly like a thousand others. I didn't say that this is something unique though. But it's damned good."
- HardRockInfo
goo.gl/hG9Ec7

All music and lyrics written, mixed, arranged and performed by In Shadows and Dust.
Mastered by John Bart Van Der Wal @ Hewwetover Studio
artwork / design : Manel-Song Ollé Chin
photograph : Mathieu Missiaen
Thanks to Taïka, Marie, Susan and Mathieu for their support, Thomas Haywood from Redefined Darkness Record, my coworkers by supporting me in my Metal journey and buying ISAD stuffs, everyone that contributed by a way or another to make things more forward.
HM-2 infused and powered, because the saw is the law.

In Shadows and Dust recommends:

Bandcamp Daily  your guide to the world of Bandcamp